Membership in the first place 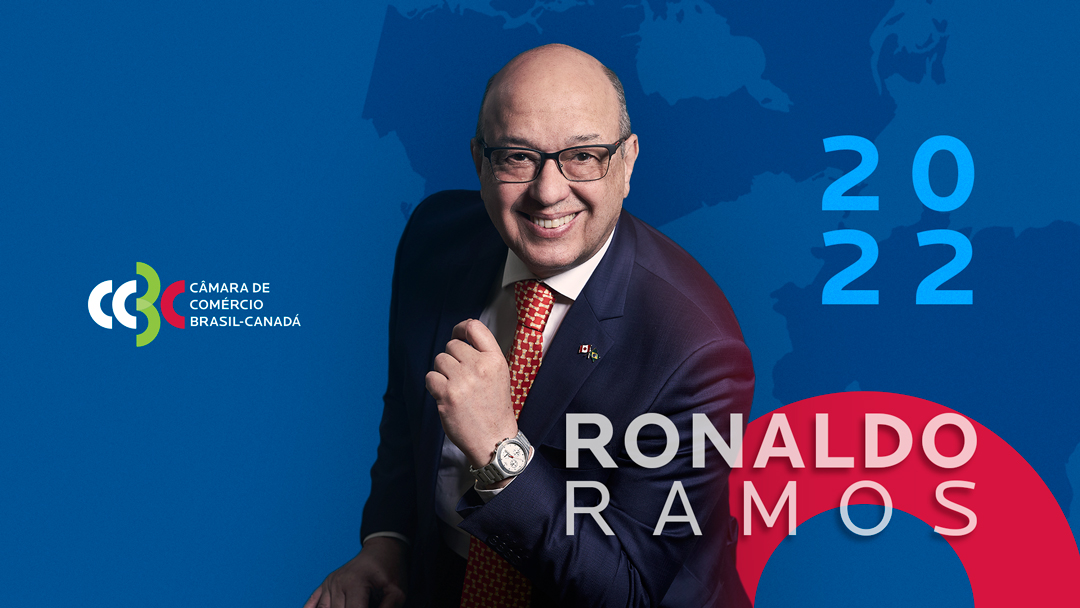 In its first eight months in charge of the Chamber of Commerce Brazil-Canada(CCBC), the administration started in May 2021 promoted a model aimed at valuing members – giving them more voice in the Chamber’s affairs and strengthening the entity’s role in promotion of initiatives that would bring more business opportunities. And this during the second year of the Covid-19 pandemic, which limited face-to-face contacts and maintained uncertainties regarding the resumption of business. CCBC president Ronaldo Ramos, who heads the 2021-2023 term with the collaboration of a high-level committee of vice presidents, spoke to CCBC Newsletter about the results obtained in these first months of the administration. The following are excerpts from the interview:

CCBC Newsletter: How do you rate the first months of your term?

Ronaldo Ramos: We seek to structure new products and services, offering more opportunities that would make it possible to reinforce the leading role of our members in the Chamber’s events and activities – such as, for example, those promoted by the various sectoral committees. In addition, we have focused more on capturing additional revenue through partnerships and sponsorships. Another important point was the organization of missions, business rounds and large events between Brazil and Canada – always with the support of virtual technologies. With this, even under the restrictions brought  by  Covid-19 pandemic, we managed to keep the generation of business between the two countries active.

CCBC Newsletter: What measures have been adopted to strengthen the performance of the Chamber?

Ronaldo Ramos: A topic to be highlighted is the internal effort made to strengthen our communication channels, disclosing our work with transparency – both for members and for society in general. We also strengthened our governance structure, and, in this sense, we are adopting a more budget-oriented focus in our administrative management.

Also worth mentioning is the creation of two new sectoral committees, established last year. They contribute to expanding the CCBC’s area of ​​activity and, at the same time, strengthening the other committees – after all, there are many themes that are common to several sectors. One of these committees is the Financial Affairs , created with the purpose of being a forum for the exchange of experiences and information, as well as for the identification of business opportunities. The other, Natural and Urban Environment reveals the CCBC’s concern with sustainability and will focus on the dissemination of good practices from both countries.

Another important measure is the structuring of the activities of the CCBC office in Canada, based in Móntreal (Québec), under the coordination of Michelangelo Madalena. This will make it possible to further intensify the exchange with this important province, bringing its companies closer to potential Brazilian partners, and vice versa.

CCBC Newsletter: The trade flow between Brazil and Canada has shown a consistent growth trend for some years now. Is it possible to say that, despite the pandemic and its impacts on travel and business, Brazil and Canada continue to deepen their bilateral relationship – and that this should continue in 2022?

Ronaldo Ramos: No doubt. According to the most recent data, the trade flow between Brazil and Canada reached in 2021 the sum of US$ (FOB) 7.478 billion – 21.53% more than in the previous year. And there is still plenty of room to increase this exchange, since Canada receives only 1.7% of total Brazilian exports; and Brazil, only 1.2% of Canadian foreign sales.

The CCBC managed, even in a virtual way, to foster the interaction of bilateral business in various sectors of the economy – such as, for example, telecommunications, civil construction, energy, infrastructure, food and beverage, health and mining technologies. Throughout 2021, both trade between the two countries and investments in infrastructure opened up several opportunities for deepening relations between Brazil and Canada. So much so that the CCBC is already structuring for 2022 several trade missions to Canada, in different sectors, in order to contribute to intensify this relationship.

Brazil also remains an interesting country for Canada to allocate investments. Between 2011 and 2020, they totaled US$ 129.6 billion, surpassing the equivalent of countries like Mexico and Portugal, for example. Recent evidence of this trend is the interest that the Brazilian infrastructure sector aroused among Canadian investment funds last year. This is the case of the Ontario Teachers Pension’s Plan (OTPP), which acquired control of the company Evoltz, which operates six electricity transmission lines in Brazil, from the manager TPG Capital; and the Canada Pension Plan Investment Board (CPPIB), which took control of 45% of Iguá Saneamento, which purchased at the end of April one of the blocks auctioned by Companhia Estadual de Águas e Esgotos do Rio de Janeiro (Cedae).

CCBC Newsletter: One of the topics announced at the beginning of the current administration was the alignment of the CCBC with the strategic agendas of both Brazil and Canada. How is this happening?

Ronaldo Ramos: This is, in fact, one of our pillars. We work together with the Brazilian Consulates and Embassy in Canada, and with their Canadian counterparts in Brazil, always focusing on the priority sectors of the bilateral relationship: investment attraction, infrastructure, health, agribusiness, technology and innovation, among others. This action is conducted through partnerships, both with the Brazilian and Canadian governments, through events that bring together companies and institutions from both countries.

CCBC Newsletter: Upon starting his management, Mr. highlighted the importance of the environmental, social and governance (ESG) agenda in the work of the CCBC. How has the Chamber developed the theme?

Ronaldo Ramos: Canada is a country with extensive experience in this area. And CCBC has always been working to bring the best Canadian ESG practices to the Brazilian context, while also taking our positive examples to Canada. Within this exchange of ideas and practices, the CCBC works on the ESG agenda in a transversal way since these themes are present in all sectors of the bilateral relationship between the two countries.

In the field of diversity, CCBC last year became a signatory to the Women’s Empowerment Principles (WEPs). It is an initiative of the UN Global Compact that aims to guide companies on the promotion of gender equality and women’s empowerment.

CCBC Newsletter: Over the last two years, the distance communication model, imposed by the Covid-19 pandemic, has limited the possibility of face-to-face contacts between Brazilian and Canadian entrepreneurs; on the other hand, CCBC took the opportunity to intensify the use of webinars as a way of bringing the two business communities closer together. Will this model continue, even with the expected retreat of the pandemic in 2022?

Ronaldo Ramos: This model proved to be positive – which was evident in the trade missions, business rounds and virtual events promoted by the Chamber throughout this period. For this year, we imagine the adoption of a hybrid model: some activities will have to be conducted in person, but we will also maintain the use of virtual tools for distance communication. In this way, we will be able to take the advantages offered by both formats to our members and partners.

CCBC Newsletter: What can CCBC members expect in 2022?

Ronaldo Ramos: They can expect the continuity of a strategy that is always focused on generating business, with increasingly better results for our members. One of the initiatives developed for this purpose is the Canada Hub, launched at the end of last year. It is a soft-landing program, which aims to provide support to Canadian companies that want to open a business here in Brazil. We offer all the necessary environment for the company to establish itself here, fulfilling  bureaucratic obligations, optimizing costs, and also counting on the support of CCBC for the development of business with partners and customers. For 2022, we are developing a similar platform, but in the opposite direction: the Brazil Hub, which will aim to support Brazilian companies that want to establish themselves in Canada.

Ronaldo Ramos: I would like to record my thanks to the Executive Committee of Vice Presidents of CCBC, formed by high-level professionals who have contributed in a crucial way in our journey – after all, you can’t get anywhere alone! And I would also like to thank the CCBC team without you, nothing would have happened, as well as our fellow diplomats from both countries. It is through the exchange of ideas and collaboration among all that we will be able to take the Chamber’s success story forward, strengthening the entity’s position as a reference in its sector.