As a pioneer in dramaturgy and real life, the Brazilian actress shows how it is possible to open paths for the future

As a child, Taís Araújo learned she had to build her icons. Disney princesses, Barbies, they were all white, just like her schoolgirls — she was the only Afro-descendant in her class at an upper-middle-class school. She was the first black protagonist of a Brazilian telenovela at 17, Xica da Silva, broadcasted in 1996, portraying a freed slave after marrying a wealthy Portuguese in Brazil’s colonial times. Next, she started collecting pioneering roles in television dramaturgy. Then, she became the first black presenter of a beauty show, Superbonita, on cable TV and opened an avenue for black girls to parade their beauty and be proud of their physical appearance.

Today, at the age of 42, she is a famous actress and inspires the new generations. Accustomed to speaking about feminism, racism, and other social issues, Taís spoke exclusively to Explore about her role as a citizen and artist in society. Nothing motivates her more, however, than education, a factor of undeniable efficiency in transforming the world. Married to actor, director, and activist Lázaro Ramos, she raises her children João (9 years) and Maria (6 years) towards those changes she wants to see in society.

At 17: playing the ex-slave Xica da Silva; shining in the mega-hit soap opera Cheias de Charme; in Mr. Brown, the first series starring a black couple on Brazilian TV and as the host of the reality show Superstar

“I realized that environmental consciousness without action serves extraordinarily little, perhaps for nothing”

Over the past 30 years, the world has changed profoundly concerning women’s, racial, social, and environmental agendas. How do you see yourself in the gear of these transformations?

I put myself at the service of these transformations. I believe we are both the tool and engine of this process, which happens in many ways: many things have been moving forward, many things have gone backward. Yesterday I met the director, Jorge Furtado. He told me that the first thing he wrote for TV Globo was in the series Delegacia de Mulheres (Women Police Office Department) in 1992, an episode that addressed abortion. And he concluded, “In ‘92, we were in the future, but it was an episode I could never write today.” Not being able to discuss issues that concern society is a tremendous setback; on the other hand, not making humor about people’s physical characteristics is a breakthrough.

On the final balance, did we improve or regress?

In some things, we have advanced. In others, it went backward. Women-related issues had several advances. Other affairs, however, specifically today, had regressed historically and in Brazil. I am incredibly optimistic, not like Pollyanna, okay? (laughs) I think history goes as follows: we take two steps back, then take five forwards. You know when Lewis Carroll wrote in Alice, you must slow down to grow up? The regression is like the following: society shows signs it needs to move forward, but those who do not want to give up privileges are shouting madly. That sounds like a much desperate cry, but it is not possible to step back anymore.

You have acted in productions committed to a cause, such as the play I have been to the Mountaintop, which addresses the last moments of Martin Luther King’s life. The Aruanas focused on the struggle for the preservation of the Amazon. What impact does this kind of fiction have on you?

I am an artist, and I need to be free to do all kinds of work, both those committed to a cause or not. Of course, engaged projects say a lot about what I am as a citizen and artist. I will talk about issues that touch me, which I think are also urgent for society. I, Taís, do not believe that all artists’ function is to adopt causes, but I choose to adopt. It is an individual choice. Aruanas, for example, was a job that changed me a lot.
I thought I had some awareness about the environmental issues, but I realized that consciousness without action serves extraordinarily little, perhaps for nothing. Environmental preservation requires effort. One takes a plane to go to work and leaves carbon footprints out there. I got to learn how to reduce that. You calculate, or you go to a startup, and they tell you, given what you have consumed, how much you have spent on carbon, and how many trees you need to plant to make up for your consumption. By telling this, as a public figure, I help to spread this dynamic. Do you know who told to me about that possibility? My cousin. She is an auditor, she works in a multinational company, and she told me, “Do you know you can give back to the planet everything you use?” I did not know that. I felt so ignorant of not knowing that I was highly motivated to do this calculation. Companies are working in this direction. There is a car rental company, for example, informing how much they are making up for to reduce carbon footprint. Another way to contribute is to commit to consumption from companies aligned with sustainability.

The environmental scenario in Brazil is susceptible. Thus, the characters of Aruanas, dramatically inserted in this fight, seem very real. How to raise public awareness?

The Aruanas series was written by two activists, Estela Renner, and Marcos Nisti. Everything is based on based on real life facts. We have had much contact with the Greenpeace staff, and the stories are all true. It seems like an action movie. That is the reason Greenpeace’s image is so strong. The life of the environmental activist is very much exposed. they use their body as a shield. 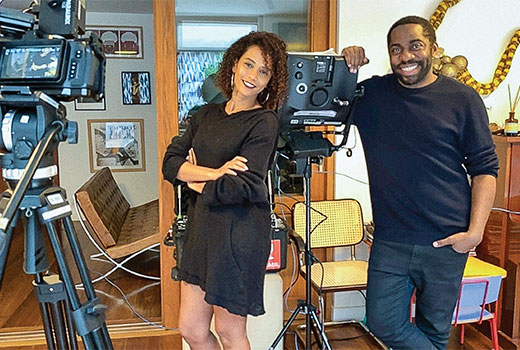 sharing the stage with her husband Lázaro Ramos in the play O Topo da
Montanha, a success that portrays the last moments of Martin Luther King, in which she was also a producer.

the couple shot at their home a comedy special for TV Globo about people’s behavior during the quarantine.

Another famous soap opera was Cheias de Charme; in 2012, three housekeepers became famous after being successful as a musical group. It was a comedy, but it was spiced with criticism about social inequality. When this engagement comes through art, not newspaper, is it more efficient?

Absolutely. This is the power of communication, audiovisual, music, literature. It is a power of transformation because since it hits the soul and heart of the audience. Cheias de Charme was a soap opera that eliminated many prejudices and sent innumerable messages. Personally, the most important was that I no longer classify any music as bad after the soap opera. You may not like it and do not want to consume it, but if the music style is a hit to bring 20,000, 30,000 people to a show, it is suitable for those 20,000, 30,000, and we cannot ignore it.

What is the most significant burden for an artist: expressing their opinions or being a fence-sitter?

What are the themes that motivate you most?

Nothing motivates me more than education. On the environmental agenda, I am still crawling. It is hard to address it; people find the subject boring. Although it concerns all of us at 100%, it is a complex issue to communicate because it is difficult to change habits. People think the Amazon is so far away! They believe that the Amazon is just the Globo Reporter TV Show’s topic, they do not have a sense of belonging, and one of the reasons is that the trip to the Amazon is expensive. If they had a chance to go, they would feel more motivated.

Is education a routine-driven agenda of those who raise children?

Education has always been a critical topic for me because I have examples of how education can transform a person’s life. My parents are the only ones with higher education in their generation, and we have a different life from the rest of our family, all due to the foundation of education.

What expectations do you nurture for your children’s generation?

It is not easy to talk about my children’s education and the general population from my perspective. I am talking about two very privileged children. Just realizing that many Brazilian children have been away from school for two consecutive years due to the pandemic, makes me at a loss for words. Of course, speaking of the education I give to my children, with the opportunities I have, the world will change, and they are going to be agents of that transformation. 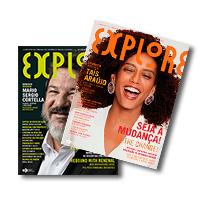 END_OF_DOCUMENT_TOKEN_TO_BE_REPLACED

This website uses cookies to improve your experience while you navigate through the website. Out of these cookies, the cookies that are categorized as necessary are stored on your browser as they are essential for the working of basic functionalities of the website. We also use third-party cookies that help us analyze and understand how you use this website. These cookies will be stored in your browser only with your consent. You also have the option to opt-out of these cookies. But opting out of some of these cookies may have an effect on your browsing experience.
Necessary Always Enabled
Necessary cookies are absolutely essential for the website to function properly. This category only includes cookies that ensures basic functionalities and security features of the website. These cookies do not store any personal information.
Non-necessary
Any cookies that may not be particularly necessary for the website to function and is used specifically to collect user personal data via analytics, ads, other embedded contents are termed as non-necessary cookies. It is mandatory to procure user consent prior to running these cookies on your website.
SAVE & ACCEPT
Conheça também o